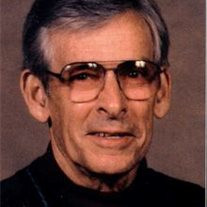 Arbie Arnett, age 89, a resident of Route 40 in Salyersville, Kentucky passed away Friday, December 7, 2012 at Highlands Regional Medical Center in Prestonsburg, Kentucky after a lengthy illness. Mr. Arnett was born August 21, 1923, in Salyersville, Kentucky, the son of the late Warnie and Audie Allen Arnett. Also, proceeding in death are sisters, Amanda Arnett, Maxie Holbrook, and brothers, Forest, Arville, Kenneth, Warnie Jr., and Russell Arnett. Mr. Arnett was a retiree from the Pipefitters Union 248 of Ashland, Kentucky. He served his country in the US Army during World War II until he was honorably discharged. Those left to mourn includes wife, Dollie Rose Arnett, sons, Carson Arnett and wife Erleen of Georgetown, Kentucky, Gregory Arnett of Mt. Sterling, Kentucky, and sister, Arcie Conley of Lancaster, Kentucky. Also, surviving are three grandchildren and a host of family and friends. Funeral services of Arbie Arnett will be conducted Monday, December 10, 2012 at 1:00 PM from the chapel of the Salyersville Funeral Home. Clergy Beecher McCarty Jr. and Lindsey Meade will deliver comforting words on the day of the service. Burial will follow the service at the Beecher McCarty Family Cemetery on Lakeville Road in Salyersville, Kentucky. The family will welcome friends Sunday, December 9, 2012 after 5:00 PM and anytime prior to funeral services. Military Rites will be given by the Magoffin County Chapter 15 DAV on the day of the service. Arrangements are under the direction of the Salyersville Funeral Home in Salyersville, Kentucky.

The family of Arbie Arnett created this Life Tributes page to make it easy to share your memories.

Send flowers to the Arnett family.