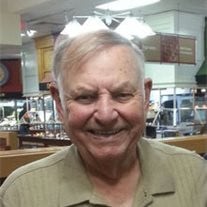 Charles Walters, age 86, a resident of Donelwal Drive in Lexington, Kentucky, passed away Saturday, April 8, 2017 at the UK Medical Center in Lexington, Kentucky. Charles was born January 26, 1931 in Salyersville, Kentucky the son of the late Garland and Lizzie Anderson Walters. Wife, Myrna Kiger Walters, Brother, Hiram Clay Walters, sisters, Jewel Dyer, Joy Cobb, Delma Powers, preceded in death. Charles served his country in the US Air Force until he was honorably discharged. He was a graduate from the University of Kentucky with a Masters Degree. He became employed by IBM and worked until his retirement in sales and marketing. Those left to mourn includes son, Kevin Charles Walters and wife Julie Ann of Burlington, Kentucky, Kimberley Walters and companion Michael John Henry of Lexington, Kentucky, brother, Sid Walters and wife Sherry of Florence, Kentucky, six grandchildren, ten great grandchildren, and a host of family and friends who love and miss him. Funeral services for Charles Walters will be conducted Friday, April 14, 2017 at 1:00 PM from the chapel of the Salyersville Funeral Home in Salyersville, Kentucky. Clergy Floyd Arnett will deliver comforting words on the day of service. Interment will follow in the Captain Powers Cemetery off Lakeville Road in Salyersville, Kentucky. The family will welcome friends Friday, April 14, after 11:00 AM and anytime prior to funeral services. Arrangements are entrusted and under the direction of the Salyersville Funeral Home in Salyersville, Kentucky.

The family of Charles Walters created this Life Tributes page to make it easy to share your memories.

Charles Walters, age 86, a resident of Donelwal Drive in Lexington,...

Send flowers to the Walters family.