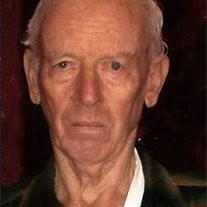 Dillard Clayton "DC" Patton, age 83, a resident of West New Buckley Road in Ashland, Kentucky; passed away Sunday, July 6, 2014 at his home after a lengthy illness. Mr. Patton was born November 5, 1930 in Salyersville, Kentucky, the son of the late Reuben and Jesse Litteral Patton. Also, proceeding in death is one brother, Corbett Patton. Mr. Patton was employed as a heavy machine operator at Mansbach Metal Company until his retirement. He was a devoted member to his family and could be found often traveling with them. He was also an avid outdoorsman, race fan, and fan of western television shows. Mr. Patton served his country in the US Army in the Korean War until being honorably discharged from service. Those left to mourn include his wife, Charlene Caldwell Patton, whom he married February 25, 1957; sons, Clayton Patton and wife Jennifer of Ashland, Kentucky, Donald Patton of Ashland, Kentucky; daughter, Sherry Patton of Ashland, Kentucky, four grandchildren, seven great grandchildren, and a host of family and friends who love and miss him. Funeral services for Dillard Clayton Patton will be conducted Wednesday, July 9, 2014 at 1:00 PM from the chapel of the Salyersville Funeral Home in Salyersville, Kentucky. Clergy Phillip Litteral will deliver comforting words on the day of services. Burial will follow the service in the Ollie May Cemetery in Salyersville, Kentucky. The family will welcome friends Wednesday, July 9, after 10:00 AM and prior to the funeral service. Arrangements are under the direction of the Salyersville Funeral Home in Salyersville, Kentucky.

The family of Dilliard "DC" Patton created this Life Tributes page to make it easy to share your memories.

Send flowers to the Patton family.