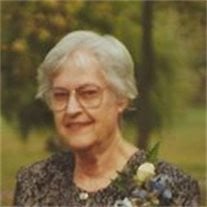 Dolores Ritchie, age 89, a resident of Michigan, passed away Monday, March 17, 2014 at St. Joseph Mercy Hospital in Ypsilanti, MI. She was born January 18, 1925 in Hendricks, KY, the daughter of Tipton and Roxie Mae (Anderson) Arnett. In October of 1953, she married Joseph Ritchie and he preceded her in death January 30, 1994. Dolores enjoyed being a seamstress and made many of her children's clothes as well as many quilts. She also was a proficient crotchetier and made many doilies, bedspreads and throws. Of all her activities, Dolores enjoyed making apple pies and giving them to friends and family members. She was a very loving and supportive mother to her children and will be sadly missed. Survivors include: three daughters and one son, Roxetta (Dave) Stepp of OH and Karen Jo (Mike) Harper, Martin Keith (Carrie) Ritchie and Vera Lynne Doyle, all of MI; three grandchildren, Kyle Tipton Ritchie, Haylie Ritchie and Joey Ritchie; In addition to her husband, she was preceded in death by her parents, two sisters, Claretta Preston and Catheryn Kennard and one brother, Jackson L. Arnett. Visitation will be 3-7 pm Sunday, March 23, 2014 at Stark Funeral Service where the celebration of her life will take place at 7 pm. Private burial will take place at a later date at the Ritchie Family Cemetery on Rt. 30 in Salyersville, KY.

The family of Dolores Ritchie created this Life Tributes page to make it easy to share your memories.

Dolores Ritchie, age 89, a resident of Michigan, passed away...

Send flowers to the Ritchie family.