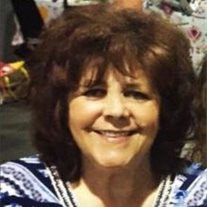 Dottie Lou Lovely Kusiak, age 68, a resident of Pleasant Lake, Michigan, passed away Sunday, September 3, 2017 at the Henry Ford Allegiance Hospital in Jackson, Michigan. Dottie was born March 7, 1949, in Paintsville, Kentucky, the daughter of the late Ossie and Hortense Jackson Lovely. Also preceding her in death are three brothers, Mitchell Lovely, Rex Lovely and Garland Lovely, and two sisters, Lela May Lovely and Bessie Archer. Those left to mourn includes husband, Randy Kusiak whom she married October 8, 1987, two sons, Kirby "Pepper' Risner and wife Michelle of Royalton, Kentucky, and David Peters and wife Tina of Paintsville, Kentucky; one daughter, Mindy Schmitt of Cross Lanes, West Virginia; one brother, Nelson Lovely of Royalton, Kentucky, and three sisters, Louise Fletcher of Royalton, Kentucky, Charlotte Elsie of Salyersville, Kentucky, and Kay Elsie of Salyersville, Kentucky. She also leaves behind six grandchildren and a host of family and friends who love and miss her. Funeral services for Dottie Kusiak will be conducted on Friday, September 8, 2017 at 1:00 PM. Comforting words will be given by Mike Smith and Price Porter. Entombment will follow in the Bal Whitt Cemetery in Royalton, Kentucky. The family will welcome friends on Thursday, September 7, 2017 after 6 PM, and anytime prior to funeral services on Friday, September 8, 2017. Condolences can be made at www.salyersvillefuneralhome.net Salyersville Funeral Home is both honored and privileged to be entrusted with all funeral arrangements for Mrs. Dottie Kusiak.

The family of Dottie Kusiak created this Life Tributes page to make it easy to share your memories.

Send flowers to the Kusiak family.