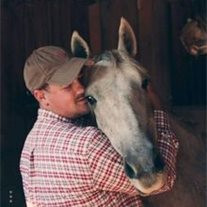 Jason "Jay" Howard, age 32, a resident of Salyersville, Kentucky, passed away Saturday, May, 20, 2017 in Warren, Michigan. Jay was born April 5, 1985 in Prestonsburg, Kentucky, the son of Jesse J. Howard and the late Brenda Faye Puckett Howard. He is also preceded in death by one brother, James Jerry Howard. He was a union millwright and a member of Local #1076 of which he was very proud of. Those left to mourn include his wife, Mika Reed Howard, children, Brennen Tate Howard and Ayden Jade Nickell both of Salyersville, Kentucky; father, Jesse J. Howard of Royalton, Kentucky, three sisters, Jessica Risner and husband Daniel "Roho" of Royalton, Kentucky, Renee Wireman and husband Jesse of Carlisle, Kentucky, and Sherry Meadows and husband Tom of Southshore, Kentucky. Also surviving are special uncle and aunt, Charles and Dorothy Puckett of Royalton, Kentucky, four special nieces and nephews, Jacqueline Spurlock, Chad Salyer, Dalton Howard and Shanna Howard, and a host of family and friends. Funeral services for Jason "Jay" Howard will be conducted Saturday, May 27, 2017 at 11:00 AM here from the chapel of the Salyersville Funeral Home with Manuel Minix officiating. Burial will follow in the Howard Cemetery in Royalton, Kentucky. The family will welcome friends Friday after 2:00 PM and until time of service Saturday, May 27, 2017 at 11:00 AM. Condolences can be made at www.salyersvillefuneralhome.net Arrangements are under the direction of the Salyersville Funeral Home in Salyersville, Kentucky.

The family of Jason Howard created this Life Tributes page to make it easy to share your memories.