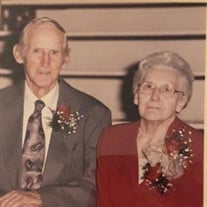 Nannie was born at Harper, Kentucky on October 16, 1920. She was the fourth of eight children born to John and Lou Coffey Dingus. She was predeceased by both parents and all of her siblings: Ronald Dingus, Thelma Dingus, Ruby Burton, Bill Dingus, Lena Keaton, Charles "Buster" Dingus and Faye Howard. She was also preceded in death by her son-in-law Steve Measel and granddaughter Joy Brooke Measel. On January 17, 1945 Nannie was married to Glenmore Collinsworth. After 58 years of marriage, Glenmore passed away on April 18, 2003. While the family thought that Nannie might soon follow, she showed us all how strong she was. She continued to live in her home until July 25, 2021. During the last six years of her life she was cared for by her three children and her daughter-in-law. She had always been a nurturer so her family know from her example how to step up and care for her. Nannie is survived by her son Doug Collinsworth and wife Pat of Salyersville, daughter Peggy Measel of Salyersville, and daughter Nadine Griffith and husband Ray of Morehead. Also surviving are seven grandchildren: Ramona (Gordon) Scherer, Matt (Kelly) Collinsworth, Carmen (Don) Rogers, Misty (Brett) Litton, Russell Measel, Kathleen (Harry) Burchett, and Celeste (Joe Bayes) Collinsworth. There are also 12 great grandchildren: Abby Scherer, Gordy Scherer, Sadie Rogers, Grace Rogers, Ivy Litton, Hattie Litton, Brynn Collinsworth, Eli Collinsworth, Harrison Burchett, Olivia Burchett, Madelyn Burchett, and Rowan Bayes. Nannie was also blessed with bonus grandchildren : Leslie Reed and Becky Reed Tuttle, along with many nieces and nephews. Other very special people in the lives of the Collinsworth family are neighbors Malinda Sprague and Essie Wright. Also, another special gift is dear friend Phyllis Arnett. The family probably could not have navigated the past year and a half without our Hospice angels: Lorna, Tosha, Virginia, Alex, Beth, Crystal, John, and other who may have subbed from time to time. "...to the top of some hill climb, To where you can see the valley Lying still and quiet below..." From the poem Twilight, written by Nannie on June 14, 1940 There is a new grave on the hillside today. Funeral services for Nannie Collinsworth will be conducted Thursday, July 29 at 11:00 AM from the Chapel of the Salyersville Funeral Home. Interment will follow in the Glenmore Collinsworth Cemetery in Salyersville, Kentucky. The family will welcome friends Thursday, July 29 after 10:00 AM until the hour of the funeral service. The Salyersville Funeral Home is honored to be entrust with the funeral services.

Nannie was born at Harper, Kentucky on October 16, 1920. She was the fourth of eight children born to John and Lou Coffey Dingus. She was predeceased by both parents and all of her siblings: Ronald Dingus, Thelma Dingus, Ruby Burton, Bill Dingus,... View Obituary & Service Information

The family of Nannie Beatrice Dingus Collinsworth created this Life Tributes page to make it easy to share your memories.