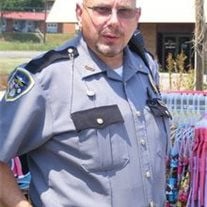 Brian Dale Baldwin, age 51, a resident of Creek Side Drive in Prestonsburg, Kentucky, passed away Thursday, August 22, 2013 at his home with his family bedside. Mr. Baldwin was born February 21, 1962 in the Paintsville Hospital in Paintsville,... View Obituary & Service Information

The family of Police Chief Brian Baldwin created this Life Tributes page to make it easy to share your memories.

Brian Dale Baldwin, age 51, a resident of Creek Side Drive in...