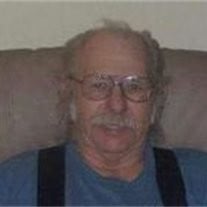 Richard Florian, age 78, a resident of Big Branch Hollow in Banner, Kentucky, passed away Saturday, March 18, 2018 at the Greg and Noreen Wells Hospice Care Center in Hazard, Kentucky. Richard was born October 23, 1939 in Albion, Michigan the son of the late Leo and Dema Florian. Son, Leon Jones Jr., also preceded in death. Richard proudly served his country in the US Army until he was honorably discharged. He worked as laborer, but mostly as a skilled carpenter. He enjoyed anything using his skills on wood. Those left to mourn includes wife, Marilyn Green Florian, whom he married July 20, 1991, of Banner, Kentucky, sons, Rick Green and companion Barbara of Springport, Michigan, Raymond Jones of Banner, Kentucky, daughters, Mary Foltz and husband Charles of Lake Wiley, South Carolina, Kathy Sunberg and husband Kevin of Marshall, Michigan, Joann Wrenn and husband Roy of Beaverton, Michigan, Michelle Marshall and husband Richard of Banner, Kentucky, Amy Nuremberger and husband Jeremy of Eaton Rapids, Michigan, brother, Carl Florian of Eaton Rapids, Michigan, twenty-four grandchildren, fourteen great grandchildren, one great-great grandchild, a host of family and friends who love and miss him. Funeral services for Richard Florian will be conducted Wednesday, March 21 at 1:00 PM from the chapel of the Salyersville Funeral Home in Salyersville, Kentucky. Clergy Otto "Butch" Whitaker will deliver comforting words on the day of service. Interment will follow in the Marshall Cemetery on Gun Creek Road in Salyersville, Kentucky. The family will welcome friends Wednesday, March 21 after 10:00 AM and anytime prior to funeral services. Contributions can be made to the Richard Florian Memorial Fund here at the funeral home. Condolences can be made at www.salyersvillefuneralhome.net Salyersville Funeral Home is both honored and privileged to be entrusted with the funeral arrangements.

The family of Richard Florian created this Life Tributes page to make it easy to share your memories.

Send flowers to the Florian family.