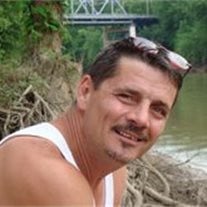 Richard Dean McDaniel, age 51, a resident of Wilder, Kentucky; passed away Thursday, August 14, 2014 in Salyersville, Kentucky. Mr. McDaniel was born October 14, 1962 in Fort Thomas, Kentucky the son of Donald McDaniel and the late Myrtle Hurd Strunk. Also, proceeding in death is one son, Chaz McDaniel; and brothers, Donald McDaniel, Phillip McDaniel. Mr. McDaniel was employed as a contract painter and business owner of Precession Painting in Wilder, Kentucky. Those left to mourn include him include fiancée, Pam Reinhardt of Wilder, Kentucky; daughter, Desiree Viox of Lexington, Kentucky; sister, Kimberly Cooper; brothers, Chris Hughes of Cuyogha, North Dakota, and Patrick McDaniel of Falmouth, Kentucky. Also, surviving is a host of family and friends who love and miss him. A memorial service celebrating the life of Richard Dean McDaniel will be announced at a later day in Wilder, Kentucky. Arrangements are under the direction of the Salyersville Funeral Home in Salyersville, Kentucky.

The family of Richard McDaniel created this Life Tributes page to make it easy to share your memories.

Send flowers to the McDaniel family.