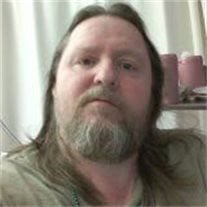 Ricky Neil Triplett, age 51, a resident of Mash Fork Road in Salyersville, Kentucky passed away Monday, December 22, 2014 at the Signature East Rehabilitation Center in Louisville, Kentucky. Mr. Triplett was born March 10, 1963 in Martin, Kentucky the son of Jimmy Triplett and Alice Farley Wicker. He is preceded in death by one son, Ricky Triplett Jr., nephew, Alex James Schultz, and brother-in-law, Dave Newman. Mr. Triplett has gone to be with the Lord, whom he loved with all his heart. He enjoyed reading his Bible, spending time with his grandchildren, and UK sports. Mr. Triplett was a business owner in the pizza industry until his retirement. Those left to mourn include two daughters, Kristie Carpenter and husband John of Georgetown, Kentucky, Katie Triplett Howard and husband Dustin of Salyersville, Kentucky; grandchildren, Bentley Carpenter, Mailey Carpenter of Georgetown, Kentucky, Peyton Blanton of Salyersville, Kentucky; four sisters, Shelia Albright, Brenda Newman, Donna Wright and Tammy Shultz all of Willard, Ohio. Also, surviving is a host of family and friends who love and miss him. Funeral services for Ricky Neil Triplett will be conducted Sunday, December 28, 2014 at 1:00 PM here from the Chapel of the Salyersville Funeral Home in Salyersville, Kentucky. Clergy Samuel Wright will deliver comforting words on the day of service. Interment will follow in the Chaffin Cemetery in Mousie, Kentucky. The family will welcome friends Saturday, December 27, after 6:00 PM and anytime prior to the funeral service. Services are under the direction of the Salyersville Funeral Home in Salyersville, Kentucky.

The family of Ricky Neil Triplett created this Life Tributes page to make it easy to share your memories.