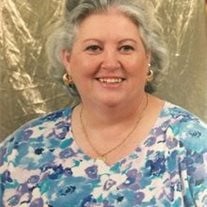 Ruby Miller Salyer, age 70, a resident of Royalton, Kentucky, passed away Thursday, July 27, 2017 at Highlands Regional Medical Center in Prestonsburg, Kentucky. Ruby was born March 2, 1947 in Decoy, Kentucky, the daughter of the late Joe and Dovie Joseph Miller. Also preceding her in death are five brothers, Elmer Miller, Delmer Miller, JB Miller, Lloyd Miller and Santford Miller, also a niece and nephew Delmer Miller Jr., and Debra Miller. Those left to mourn include her husband, Robert Wayne Salyer of Salyersville, Kentucky, five brothers, Loss Miller of Hilliard, Ohio, Arthur Miller, Gary Miller, Larry Miller, and Marvin Miller all of Salyersville, Kentucky, three sisters, Oma Taylor of Columbus, Ohio, Geneva Cunningham of Toledo, Ohio, and Jody Shepherd of Salyersville, Kentucky. Funeral services for Ruby Salyer will be conducted on Tuesday, August 1, 2017 at 11:00 AM from the chapel of the Salyersville Funeral Home. Comforting words will be given by Irvin Allen and Greg Minix. Burial will follow in the Miller Family Cemetery on Rt. 542. The family will welcome friends Sunday, July 30, 2017 after 6:00 PM, after 10 AM Monday and anytime prior to funeral services on Tuesday, August 1, 2017. Condolences can be made at www.salyersvillefuneralhome.net Salyersville Funeral Home is both honored and privileged to be entrusted with the funeral arrangements for Ruby Miller Salyer.

The family of Ruby Salyer created this Life Tributes page to make it easy to share your memories.

Send flowers to the Salyer family.