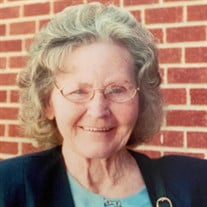 Wavel Baldridge, age 82, a resident of Louisville, Kentucky, formally of Salyersville; passed away Saturday, September 19, 2020 at the Jefferson Manor in Louisville, Kentucky with her family after a battle with COVID19. Wavel was born January... View Obituary & Service Information

The family of Wavel Baldridge created this Life Tributes page to make it easy to share your memories.

Send flowers to the Baldridge family.